The results suggest that variation in center-level red blood cells transfusion cannot be explained by patient and procedural factors alone. Investigating organizational culture and programmatic infrastructure may be necessary to better understand variation in transfusion practices.

The Role of Race on Acute Kidney Injury After Cardiac Surgery 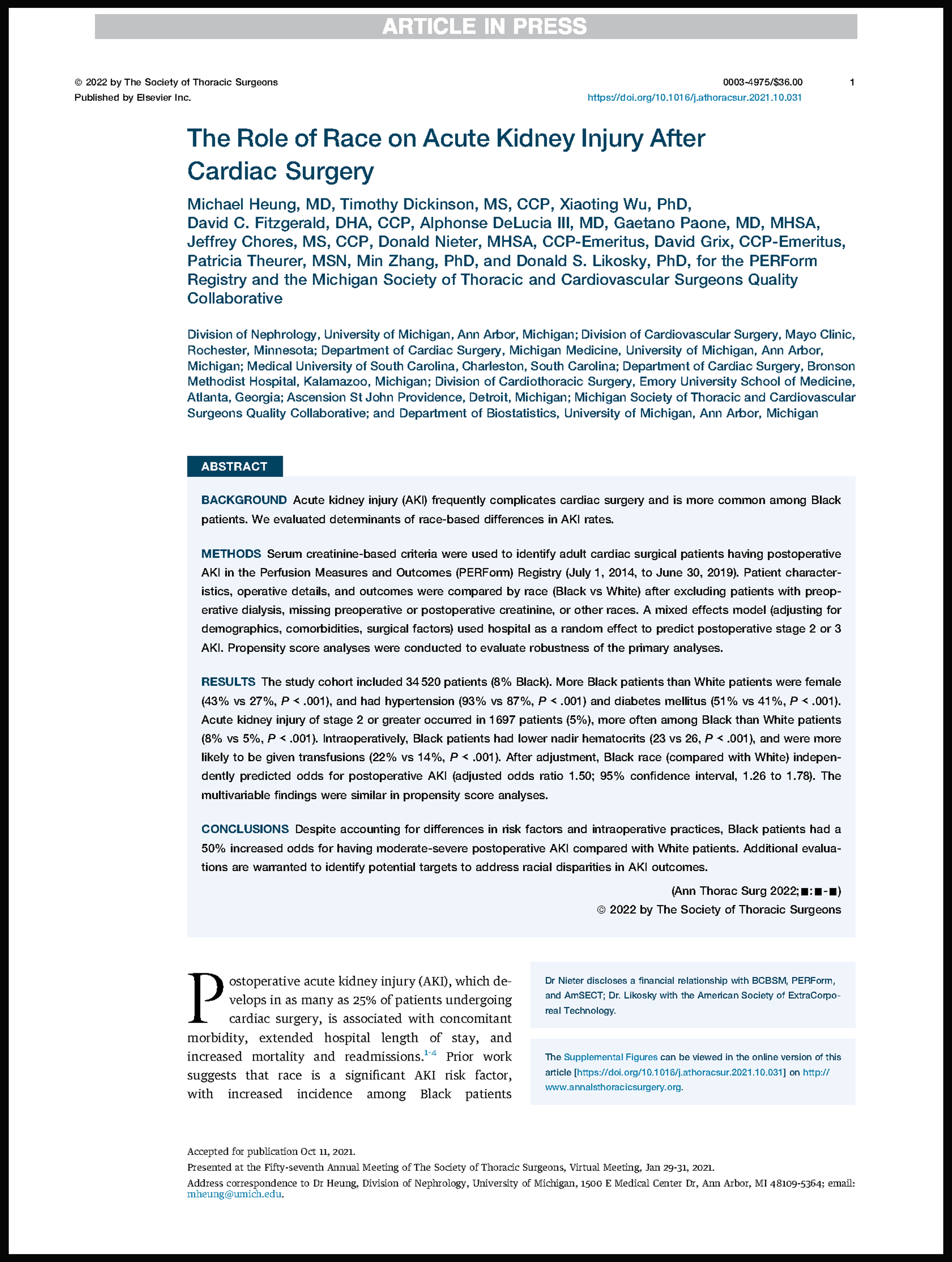 Serum creatinine-based criteria were used to identify adult cardiac surgical patients having postoperative AKI in the Perfusion Measures and Outcomes (PERForm) Registry (July 1, 2014, to June 30, 2019). Patient characteristics, operative details, and outcomes were compared by race (Black vs White) after excluding patients with preoperative dialysis, missing preoperative or postoperative creatinine, or other races. A mixed effects model (adjusting for demographics, comorbidities, surgical factors) used hospital as a random effect to predict postoperative stage 2 or 3 AKI. Propensity score analyses were conducted to evaluate robustness of the primary analyses.

Despite accounting for differences in risk factors and intraoperative practices, Black patients had a 50% increased odds for having moderate-severe postoperative AKI compared with White patients. Additional evaluations are warranted to identify potential targets to address racial disparities in AKI outcomes. 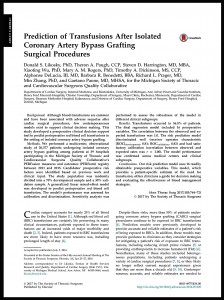 Methods: We performed a multicenter, observational study of 20,377 patients undergoing isolated coronary artery bypass grafting among patients at 39 hospitals participating in the Michigan Society of Thoracic and Cardiovascular Surgeons Quality Collaborative’s PERFusion measures and outcomes (PERForm) registry between 2011 and 2015. Candidates’ preoperative risk factors were identified based on previous work and clinical input. The study population was randomly divided into a 70% development sample and a 30% validation sample. A generalized linear mixed-effect model was developed to predict perioperative red blood cell transfusion. The model’s performance was assessed for calibration and discrimination. Sensitivity analysis was performed to assess the robustness of the model in different clinical subgroups.

Results:  Transfusions occurred in 36.8% of patients. The final regression model included 16 preoperative variables. The correlation between the observed and expected transfusions was 1.0. The risk prediction model discriminated well (receiver operator characteristic  [ROC]development, 0.81; ROCvalidation, 0.82) and had satisfactory calibration (correlation between observed and expected rates was r = 1.00). The model performance was confirmed across medical centers and clinical subgroups.

Conclusions: Our risk prediction model uses 16 readily obtainable preoperative variables. This model, which provides a patient-specific estimate of the need for transfusion, offers clinicians a guide for decision making and evaluating the effectiveness of blood management strategies. 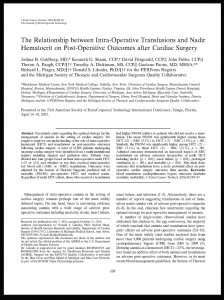 Abstract: Uncertainty exists regarding the optimal strategy for the management of anemia in the setting of cardiac surgery. We sought to improve our understanding of the role of intra-operative hematocrit (HCT) and transfusions on peri-operative outcomes following cardiac surgery. A total of 18,886 patients undergoing on-pump cardiac surgery were identified from a multi-institutional registry including surgical and perfusion data. Patients were divided into four groups based on their intra-operative nadir HCT (<21 or ≥21) and whether or not they received intra-operative red blood cell (+RBC or −RBC) transfusions. Outcomes were adjusted for the Society of Thoracic Surgeons predicted risk of mortality (PROM), pre-operative HCT, and medical center. Regardless of nadir HCT cohort, those who received a transfusion had higher PROM relative to patients who did not receive a transfusion. The mean PROM was significantly higher among those HCT ≥21 + RBC (5.3%) vs. HCT ≥ 21 − RBC (1.9%), p < .001. Similarly, the PROM was significantly higher among HCT <21 + RBC (5.1%) vs. those HCT <21 − RBC (3.1%), p < .001. Adjusted outcomes demonstrated an increased impact of RBC transfusions on adverse outcomes irrespective of nadir HCT including stroke (p < .001), renal failure (p < .001), prolonged ventilation (p < .001), and mortality (p< .001). This study demonstrates that transfusions have a more profound effect on post-operative cardiac surgery outcomes than anemia. 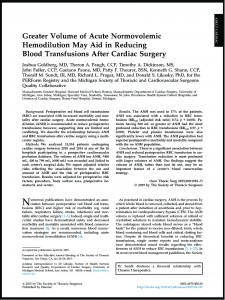 Methods: We analyzed 13,534 patients undergoing cardiac surgery between 2010 and 2014 at any of the 26 hospitals participating in a prospective cardiovascular perfusion database. The volume of ANH (no ANH, <400 mL, 400 to 799 mL, ≥800 mL) was recorded and linked to each center’s surgical data. We report adjusted relative risks reflecting the association between the use and amount of ANH and the risk of perioperative RBC transfusion. Results were adjusted for preoperative risk factors, procedure, body surface area, preoperative hematocrit, and center.

Results: The ANH was used in 17% of the patients. ANH was associated with a reduction in RBC transfusions (RRadj [adjusted risk ratio] 0.74, p < 0.001). Patients having 800 mL or greater of ANH had the most profound reduction in RBC transfusions (RRadj 0.57, p < 0.001). Platelet and plasma transfusions were also significantly lower with ANH. The ANH population had superior postoperative morbidity and mortality compared with the no ANH population.

Conclusions: There is a significant association between ANH and reduced perioperative RBC transfusion in cardiac surgery. Transfusion reduction is most profound with larger volumes of ANH. Our findings suggest the volume of ANH, rather than just its use, may be an important feature of a center’s blood conservation strategy.

Nadir Hematocrit on Bypass and Rates of Acute Kidney Injury: Does Sex Matter? 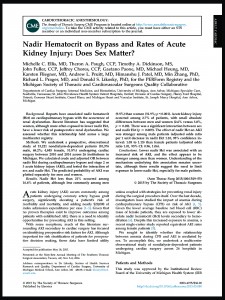 Background: Reports have associated nadir hematocrit (Hct) on cardiopulmonary bypass with the occurrence of renal dysfunction. Recent literature has suggested that women, although more often exposed to lower nadir Hct, have a lower risk of postoperative renal dysfunction. We assessed whether this relationship held across a large multicenter registry.

Methods: We undertook a prospective, observational study of 15,221 nondialysis-dependent patients (10,376 male, 68.2%; 4,845 female, 31.8%) undergoing cardiac surgery between 2010 and 2014 across 26 institutions in Michigan. We calculated crude and adjusted OR between nadir Hct during cardiopulmonary bypass and stage 2 or 3 acute kidney injury (AKI), and tested the interaction of sex and nadir Hct. The predicted probability of AKI was plotted separately for men and women.

Conclusions: Lower nadir Hct was associated with an increased risk of AKI, and the effect appears to be stronger among men than women. Understanding of the mechanism underlying this association remains uncertain, although these results suggest the need to limit exposure to lower nadir Hct, especially for male patients.

Impact of Ultrafiltration on Kidney Injury After Cardiac Surgery: The Michigan Experience 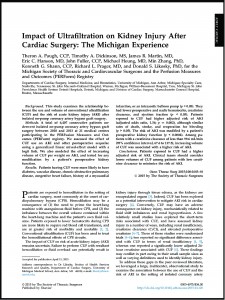 Background: This study examines the relationship between the use and volume of conventional ultrafiltration (CUF) and the risk of acute kidney injury (AKI) after isolated on-pump coronary artery bypass graft surgery.

Methods: A total of 6,407 consecutive patients underwent isolated on-pump coronary artery bypass graft surgery between 2010 and 2013 at 21 medical centers participating in the PERFusion Measures and Outcomes (PERForm) registry. We assessed the effect of CUF use on AKI and other postoperative sequelae using a generalized linear mixed-effect model with a logit link. We also modeled the effect of increasing volume of CUF per weight on AKI, and tested for any modification by a patient’s preoperative kidney function.

Results: Patients having CUF were more likely to have diabetes, vascular disease, chronic obstructive pulmonary disease, congestive heart failure, history of a myocardial infarction, or an intraaortic balloon pump (p < 0.05). They had lower preoperative and nadir hematocrits, creatinine clearance, and ejection fraction (p < 0.05). Patients exposed to CUF had higher adjusted risk of AKI (adjusted odds ratio, 1.36; p = 0.002), although similar rates of death, stroke, and reoperation for bleeding (p > 0.05). The risk of AKI was modified by a patient’s preoperative kidney function (p < 0.0004). Among patients with a creatinine clearance of less than 99.6 mL/min (95% confidence interval, 67.6 to 137.5), increasing volume of CUF was associated with a higher risk of AKI.

Conclusions: Patients exposed to CUF had a higher adjusted risk of AKI. Clinical teams should consider lower volumes of CUF among patients with low creatinine clearance to minimize the risk of AKI.

Validation of a Perfusion Registry: Methodological Approach and Initial Findings 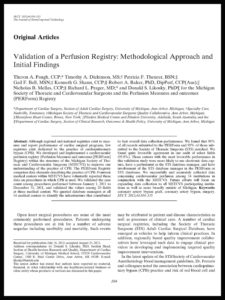 Abstract: Although regional and national registries exist to measure and report performance of cardiac surgical programs, few registries exist dedicated to the practice of cardiopulmonary bypass (CPB). We developed and implemented a cardiovascular perfusion registry (Perfusion Measures and outcomes [PERForm] Registry) within the structure of the Michigan Society of Thoracic and Cardiovascular Surgeons (MSTCVS) to improve our understanding of the practice of CPB. The PERForm Registry comprises data elements describing the practice of CPB. Fourteen medical centers within MSTCVS have voluntarily reported these data on procedures in which CPB is used. We validated the case count among procedures performed between January 1, 2011 to December 31, 2011, and validated the values among 20 fields at three medical centers. We queried database managers at all 14 medical centers to identify the infrastructure that contributed to best overall data collection performance. We found that 98% of all records submitted to the PERForm and 95% of those submitted to the Society of Thoracic Surgeons (STS) matched. We found quite favorable agreement in our audit of select fields (95.8%). Those centers with the most favorable performance in this validation study were more likely to use electronic data capture, have a perfusionist as the STS database manager, and have involvement of the STS database manager in the PERForm or STS databases. We successfully and accurately collected data concerning cardiovascular perfusion among 14 institutions in conjunction with the MSTCVS. Future efforts will focus on expanding data collection to all MSTCVS participating institutions as well as more broadly outside of Michigan.

Cardiac Surgeons and the Quality Movement: the Michigan Experience 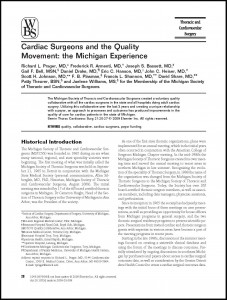 Since its inception in 1965 the society has had yearly meetings with the initial focus of these meetings on case presentations, as well as providing an opportunity for house officers from Michigan programs in general surgery, and the two thoracic surgical residency programs to present scientific papers. Presentations from invited cardiac and thoracic surgeon guests with expertise in various areas have become a part of the meeting programs in recent years.